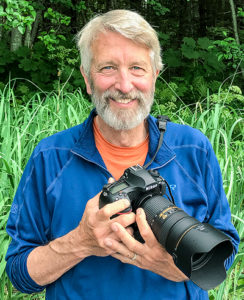 “As a kid in Buffalo, New York, I always wondered what it would be like to encounter a whale,” says Mark Kelley. “I moved north in 1974 and four years later graduated from the University of Alaska with a journalism degree.” In 1985 Mark Kelley continued on to work towards a master’s degree in photojournalism at Ohio University, where he was awarded the Paul Schutzer Memorial Award. Mark joined the staff at the Juneau Empire, Juneau’s only daily newspaper, as a photojournalist for thirteen years before moving on to a full-time career in Alaska nature and wildlife photography in 1991. Having called Alaska home for the past forty years, Mark Kelley’s deep photographic knowledge of the great state of Alaska is unsurpassed.

Mark Kelley is an award-winning photographer. Most notably, Mark received a Juneau Mayor’s Award for the Arts and he placed first in the 2013 Nature’s Best Windland Smith Rice Photography Awards—Outdoor Adventure Category and he is a recipient of the Daniel Housberg Wilderness Image Award for Excellence in Still Photography from the Alaska Conservation Foundation. Mark’s work in journalism has been recognized by the Alaska Press Club, the National Press Photographers Association, and the Society of Professional Journalists.

Mark has published fourteen photo books with over a quarter million copies sold. His books “Glacier Bay National Park: Alaska”, “Alaska’s Tracy Arm and Sawyer Glaciers”, and “Alaska: A Photographic Excursion” were each awarded a Benjamin Franklin Award by The Independent Book Publishers Association. “Alaska: A Photographic Excursion” has just been released as a 2nd Edition and has more than 65,000 copies in print worldwide. The 2014 calendar and the children’s book “Once Upon Alaska” both received an Award of Excellence from Communications Arts.

“Alaska is a place of solace in a complicated world. Alaska is my story and the camera my companion. The time and effort I put into my work allow me to keep reaching for perfection. In the end I know it will be worth it.” – Mark Kelley

Mark Kelley products help support local causes in a variety of ways. Since the inception of the Mark Kelley Alaska Calendars in 1989 calendar sales have helped generate over $20,000 in total annual donations to Discovery Southeast and the Juneau Raptor Center.  Mark is a former soccer coach, and during the Christmas holiday Mark Kelley’s calendar sales support fundraising efforts by local soccer teams, raising more than $10,000 each year. A percentage of sales from Mark’s book “Alaska’s Watchable Whales” supports the work of whale researcher Jan Straley, and the Sitka Sound Science Center.

Mark is a regular speaker at community events and with his slideshows shares the beauty of Alaska with locals and visitors alike. In 2006 Mark Kelley self-funded the exhibit “Alaska’s Watchable Whales: Humpback and Killer Whales” featured in the Governors Gallery at the Alaska State Museum.

Check out our Buy a print & receive a free 2021 calendar promotion! Dismiss